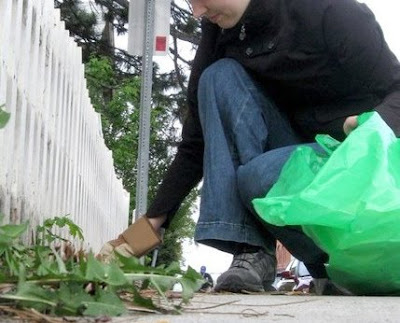 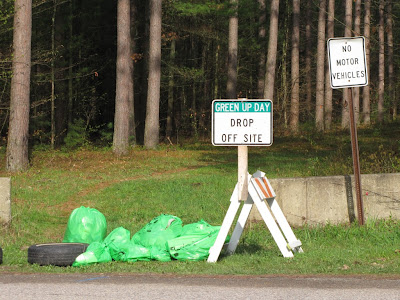 In my efforts to extol the uniqueness of the Green Mountain State (aka home), I wanted to share a photo from my friend Glenn's blog....Saturday May 1st marked the 40th yearly "Green up Day". The entire state was blanketed with locals doing, what else, but picking up garbage! Everywhere. By the roadsides, in ditches, near streams, in fields, you name it, anywhere I went on an errand, there were folks carrying bright green bags to fill. Pretty amazing. My sister, who has lived here longer than anywhere else asked "don't they do this in other places?" . I don't think so..certainly not to this scale....if one could have taken a satellite photo, you would have seen what appeared to be green martians having descended on the entire place!...one thing I have to say about the inhabitants of this state is that they take their stewardship of the land VERY seriously...
and it is a good thing....

"According to Green Up Vermont, the nonprofit organization that helps coordinate the state wide activities, 240 town coordinators participated this year, and nearly 15,000 people participated around the state. In addition to the hard work of cleaning up so Vermont can green up thousands gathered  on the State House lawn in Montpelier to hear Banjo Dan and the Mid-nite Plowboysand Bill Shontz. Food vendors, including the Ben and Jerry’s Scoop Truck. Burlington and other cities had similar celebrations. What could be better than that? Living in a place that was green before it became cool to be green!"
It's almost hard NOT to make jewelry the way I do (recycled precious metals and all that jazz) living here....
Back to blog