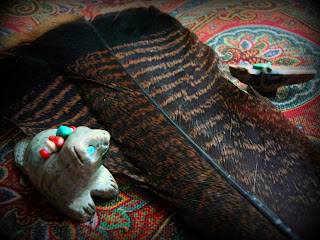 Rep. Joe Baca had this published yesterday in the Huffington Post. Just some food for thought...I know many feel as if Thanksgiving has become sort of overarching day to be thankful, in general, for what we have in our lives. Yet, the old fashioned story of the Pilgrims and Natives having a happy ending party to their good harvest is still told and studied in a completely anglo centric fashion within our schools, with no nod whatsoever to good critical investigation around how it all turned out from BOTH sides. I think there are many in this country who are unaware that for some of our Native family, this is a day of mourning.  My deepest apologies to any of you, gentle readers, if I strike any uncomfortable chord. I struggled as to whether I should even post this. But this is an issue that weighs heavy in my heart....the lack of acknowledgement. But I am a woman who speaks her mind....as I believe in truth lies power and strength....my deepest wish for you, on this day of thanks, may you be embraced by people you love, may you recognize the gifts of our mother earth, may you be warmed by the smile of a stranger, laugh of a child, and most importantly, relish your gifts and never take them for granted. Namaste

"This Friday, November 27, we celebrate the second ever national Native American Heritage Day, to honor the original native residents of this great land of ours.

American families gather together on the fourth Thursday of every November to celebrate Thanksgiving in remembrance of a feast hosted by the Wampanoag Native Americans for the Pilgrims at Plymouth in 1621. While we always remember the feast of Thanksgiving, we seldom pay homage to the Wampanoag hosts or recount what happened to them afterward.

By the time the Jamestown colony was founded in Virginia in 1607, the most accurate estimates are there were substantially more than 30 million Native Americans thriving in numerous tribes and cultures from the North American shores of Alaska to the tip of Cape Horn in South America. Unfortunately, the treatment of Native Americans over the next 300 years is one of the darkest chapters in American history.

It wasn't until the 20th century that America began to right many of the wrongs committed against our land's original inhabitants, and the first proposals were made for a day to honor Native Americans. Red Fox James, a member of the Blackfoot tribe, rode horseback from state to state in 1914 to gain support for a day of tribute. In 1915 Dr. Arthur C. Parker, a member of the Seneca tribe, persuaded the Boy Scouts of America to designate a day of recognition for Native Americans.

New York became the first state to observe an American Indian Day in 1916 and many other states have followed along through the years and designated a day to honor Native Americans. Congress granted U.S. citizenship to all Native Americans in 1924.

Throughout history Native Americans have made significant contributions to our nation, our society, and our culture. The Constitutional separation of powers of our government was based on the structure of the Iroquois Nation. As an ambassador of peace, Sacajawea guided Lewis and Clark on their exploration across the west to the Pacific coast.

Hopi, Choctaw, Comanche, Kiowa, Winnebago, Seminole, Navajo and Cherokee used their languages as secret codes to protect American forces in several wars. Navajo "codetalkers" created and memorized a code based on the Navajo language which helped the Marines win the Pacific campaign in World War II.

Native Americans continue to live according to their own traditions and cultures and are making greater contributions than ever before. More than 30 tribal colleges across the country are educating future accountants, doctors, lawyers, health care workers, educators, policymakers, and political leaders.

Amid the Thanksgiving dinners, football, and shopping this week, lets take some time to recognize Native American Heritage Day. We must never take for granted the very first inhabitants of this continent - Native Americans, and their many contributions that have greatly enriched the United States."