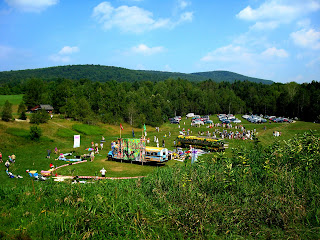 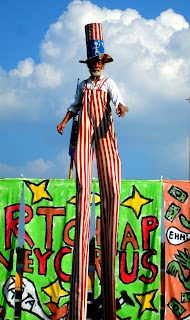 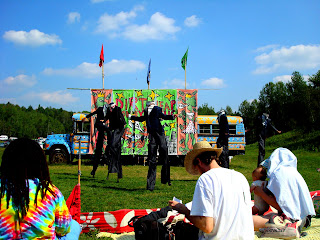 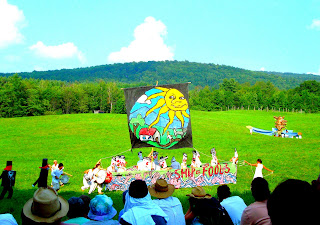 I am back everyone!...and wanting to talk about some artists near and dear to my heart, Peter and Elka Schumann's Bread and Puppet Theater. It wouldn't be summer here in Vermont, without a sojourn to their place up in Glover, Vt. To explain what they do, I will quote the bread and puppet folks themselves:
"Bread & Puppet Theater, one of the oldest non-commercial, self-supporting theaters in the country, has created politically and socially aware shows with commitment to community participants since 1963. At present, our shows are antiwar, anti-Capitalism, anti-Globalization and pro-Vermont independence."
To really get a true picture of what they are about, read this great press release about them at www.vermontartzine.blogspot.com I was going to write a bunch, but, if you are curious about them, this article explains it better than I ever could. Featured in the film Across the Universe, last year, they sure did us  Vermonters proud.
Bread and Puppet truly is the 'grandaddy' of all large scale political pageantry puppet theater groups...but one amazing offshoot is Wise Fool Puppet Intervention of New Mexico.
What can I say, but its the quintessential Vermont hippie experience, not to be missed if you are up here during their performance season!
Art....for the people, by the people!...
Back to blog