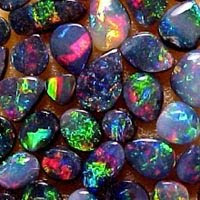 The word 'opal' comes from the Latin word, 'upala', meaning "precious stone". In ancient Roman lore, opal was a symbol of hope and purity, while the Greeks believed it gave the ability of  psychic foresight, and ancient Arabic cultures believed opal was leftover flashes of lightning, fallen from the sky! ( no wonder!) But the most powerful and ancient opal lore, comes from the Aborigines of Australia, who believe the opal is something and ancestor has left behind as a sign of his or her presence. In addition, the Wangkumara people have a legend, that explains how they first acquired fire. This happened with the assistance of a Muda; someone not unlike a Navajo shape-shifter; someone who can change from human form to, in the Aborigines case, a pelican. Opal is a stone that is believed to quiet the mind to best allow introspection...a perfect foil to receiving messages from the ancestors, in my opinion!
Most opal is 55 million or so years old, and so, dates back to the cretaceous period..when dinosaurs roamed the earth! Opal is actually non-crystallized silica and contains the most water  (30%) of any gem that we hold precious; it was created by the silica from decomposing igneous rocks that mixed with it, that collected and hardened in underground fissures. Due to opals' delicate nature ( its hardness is only 5.5 on the Moh's scale...loosely a scale we jewelers use to determine how much 'abuse' a stone can take), if you are lucky enough to own one, protect it from heat, chemicals or hard blows, as this can dry out and crack the stone, robbing it of its beauty! Opals are predominantly found in the southern part of Australia, but also show up in Mexico, Peru, Brazil and the US in Nevada.
A gift of opal is said to represent faithfulness and confidence, though more often, when friends of my work have told me 'opal stories' it seems to be in relation to messages from loved ones who have passed, or past loves....
The book The Opal that Turned into Fire by Janet Mathews is an absolutely beautiful retelling of how the opal came to the Wangkumara...oh, and I forgot one more tidbit...the most perfect translation of what opal means...the Latins also called opals "cupid paederos"...or "a child as beautiful as the heavens".... You are all glittering opals in this life.....

whew!....off to my most amazing acupuncturist, Kelly, ( working on assuring my recent foot surgery heals perfectly!) and then a few hours at the bench to get some orders finished to ship!...have a beautiful day!
Back to blog